I’m sure many of you right now are looking forward to the New Year of 2016 while stuffing your face with turkey leftovers. I hope you are all where you would like to be, with family and friends or just doing what you want to do!

The Forbes article also offers some advice on how to make your resolutions work, but I would like to offer some alternative advice based on a book I recently read: The Power of Habit: Why We Do What We Do in Life and Business

This article will be about changing your habits, which to me seems like what I would want to do with my New Years Resolutions.

I would like to share with you the important notes from the appendix of this book – including a method, informed by science and research, on how to change your habits in a lasting way.

Changing your habits is a choice that you have to make. Only you have the ability to alter your habits, nobody can do it for you and there are no hypnosis techniques or quick fixes that can do it with minimal effort from you.

This is because our brains create a feedback loop when our habits satisfy our urges. The longer you have the habit, the stronger it becomes.

For example, I like to eat chocolate. It is a bad habit with numerous health effects, but one that I have managed to curb somewhat by making alterations to the things I do in response to internal cues. 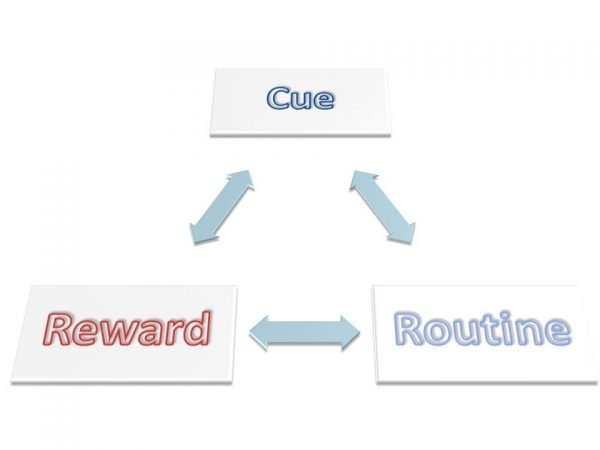 For me, the chocolate eating habit is as follows:

Routine – Automatically buy and eat chocolate at the convenience store as soon as I finish work.

Reward – Sugar rush and happiness from the delicious snack.

As you can imagine, this habit was particularly destructive for my health, my weight and my teeth. I realised that I had to change things up a little bit and adapt, but my first attempts at dropping chocolate and sugars in general from my diet were spectacular failures.

That’s because your mind will revert to old habits as soon as you experience the cue that leads you to your routine, and you will find yourself following the old habit automatically! In times when I lacked the willpower to tell myself “No” and avoid chocolate (such as after a tough day at work), I would revert back and the sweet delicious cavity-creating reward was even stronger than before!

We have all experienced this when our resolution to go to the gym four times per week gets beaten out when we are too tired or feel lazy. You make excuses for yourself:

“Oh, I’ve worked really hard this week so it is okay to skip the gym this once, I’ll go tomorrow for sure.”

But tomorrow comes and you have already started down the slippery slope. You feel nice chilling out at home drinking tea with ginger biscuits and watching Netflix in your PJs. Before you know it that note you wrote on your calendar telling you which days to go to the gym is being completely ignored. The guilt of avoiding the gym and not fulfilling your promise to yourself has subsided.

That’s because we have tried to change our habits without addressing the routine that drives us in the first place!

Instead, Habits tells us to experiment with the routine and identify the cues. This way we can slowly alter our habit and create new ones that will be easier to switch to.

So I decided after reading this that my routine of chocolate gorging whenever I felt hungry or bored was going down. First step was to experiment with the routine.

While experimenting with your routine, give yourself an easy time. No stress. If I do end up buying a chocolate bar while trying to change my routine, it’s okay. For now we are just trying to see what works.

First I try subtly switching chocolate to something else. I usually buy the chocolate when I pass the convenience store on my way home from work, so on day one I bought an apple instead. I enjoyed it and took the train home, but the next day I didn’t want an apple – the core is a pain to get rid of if I eat the apple on the train… I want the convenience of a nicely wrapped chocolate bar instead.

So the next day I try a cup of coffee that is much easier to get rid of, and again that doesn’t work because I have become used to the sweet flavour of the chocolate, and crave that same reward.

Okay. Seems an apple or a cup of coffee won’t do it for me, so it isn’t just that I am hungry or craving something delicious or else an apple would fulfil the same urge. I must be bored.

I didn’t buy any chocolate when I didn’t go into the store, so going into the store was a routine that was causing me to buy the chocolate. Having something to distract me from going to the store (talking with co-workers) was enough to break the habit loop, at least temporarily. This also provides me with key information about the habit.

I buy chocolate when I walk into the convenience store after work, by myself when I am lacking stimulation. I don’t need the chocolate – eating the chocolate is just something to do while I ride the train home by myself.

As I was doing this I wrote down a few things each day when I succumbed to my habitual urges.

What time it was

Write them down when you do your routine and notice which parts change and which don’t.

In my situation, it was always the convenience store near the station after work, so all I need to do now is make a plan that reduces or eliminates the temptation to go into the store and get a chocolate bar.

And write it down!

On my way home from work, I will try to go with my co-workers. If that isn’t possible, I will time it so that I do not have time to go to the convenience store.

As I followed this plan every day, eventually the habit lost its hold, and was replaced with the new habit of talking with friends or rushing for the train. One time when I missed the train and still had time to go to the store I also tried calling a friend on my phone. This too helped me to avoid the routine of going to the store because it provided the stimulation I was looking for. Other days I would bring carrots to work when I knew I was going to be working later than my co-workers and that provided the distraction I needed to avoid the chocolate.

By identifying these steps in my habits, I was able to change them considerably. At first it required some effort but as time went on and the habit faded, it became easier for me to avoid buying chocolate. Now I almost never buy chocolate on my way home from work, and even if I do find myself wandering into the store on days when I haven’t followed my plan, I just get some kara-age (Japanese style fried chicken) instead.

I hope that doesn’t become a new habit…

So good luck with breaking your bad habits and making New Years Resolutions. I know that there are a lot of habits that are much harder to break than just eating chocolate but with these steps I think it will be a lot easier to start!