If you’re looking for a web hosting service, I implore you to stay away from BlueHost.

I signed up with Bluehost at the start of 2016 on the recommendations of many of the business blogs I follow: Pat Flynn, I think Tim Ferriss used to, and so on. It was cheap and it had a lot of recommendations. I found a ton of reviews saying that the whole package was great and that there wouldn’t be anything else around for as little cash up front. I’m going to give you my perhaps biased but brutally honest review, because I recently switched away from them and the difference has been night and day, while the price has remained almost the same but with better service.

There are alternatives to Bluehost that don’t have terrible service

I had businesses I wanted to start and so I got Bluehost, and upgraded to their more expensive “Plus” package so I could have more than one website. I added a few more domains after going without issue for a month or two. After just a little while I noticed servers going down frequently and my page speed dropping like a stone. BlueHost emailed me occasionally telling me that there had been updates to security, stability and speed but I never noticed these so-called improvements. My website front page load speed had, at times, dropped to nearly 8 seconds on even relatively small page sizes and the server was taking SECONDS to respond to queries.

This is Bluehost taking nearly 2 seconds to load the 18.2kb index page. UNACCEPTABLE! 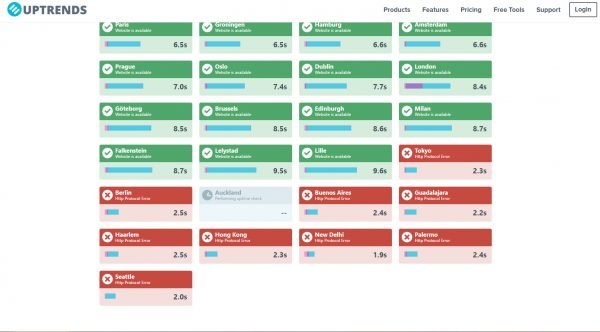 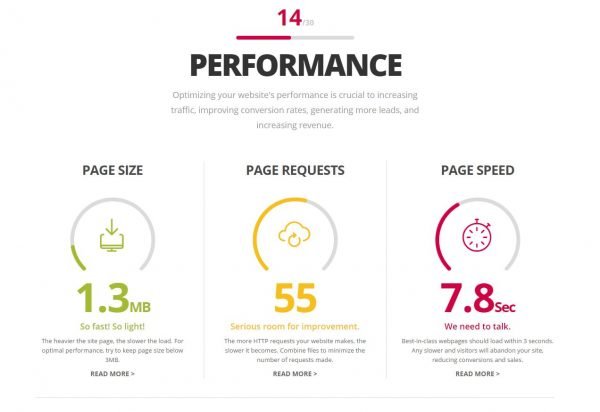 Another note: BlueHost frequently gets blacklisted, so the mails I was sending through my bluehost email addresses (@mysite.com) were often getting marked as spam and not reaching users on my mailing lists or clients – I had to start using my personal Gmail account to mail clients because my hosting one wasn’t being received.

What were the other problems?

My problems started in February when I was getting twice daily mails from my Jetpack plugin telling me that my site was down for 7 minutes, 9 minutes, 15 minutes…

This… almost every day. Sometimes it would happen while I was working on articles on my website and bits of them would be lost – that’s when I started using Google Drive to write all of my articles and porting them over to WordPress.

I thought it might be maintenance or upgrading of the service, so I picked up their chat line asking:

Me: “My website is saying it is down almost every day, what is going on?”

Me: “It’s working now, I’ve been waiting 30 minutes for you to answer! It wasn’t working earlier today and yesterday and the day before that, according to Jetpack I get downtime every day!”

BlueHost: “You should turn off your Jetpack monitor then.”

That is basically the regular experience with BlueHost support, you tell them there is a problem and they waste your time telling you that it isn’t actually happening, that somehow your downtime, 502 errors and routing problems are just in your head because “it’s working on my end.”

Moving my popular WordPress installs to another provider seemed like something that would take some serious doing, and for too long I didn’t move my websites for fear of not being able to get them working again quickly and losing revenue or leads to downtime.

Where was the tipping point?

The biggest reason why I felt like I had to cancel Bluehost to change sooner than later was the service. I always felt like I was fighting with the support staff, and they always wanted me to prove to them that my problem was real and not just made up. I can understand if they want to make sure that there is an issue first, but they have almost always been adamant that there was no problem, that nothing was wrong or that I didn’t have any proof for the problem that I told them I was experiencing. Even when I did get proof (see traceroute below) they would find some way to show that nothing was wrong. I felt like they just wanted me to go away. 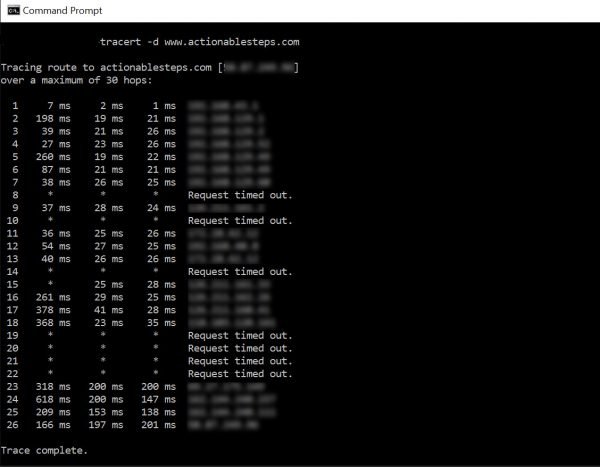 Honestly, if you treat your customers like that and you have a culture of being unhelpful and unreasonable, no wonder you have such low customer reviews on sites that ask for real feedback from real users. And it should be lower, but I can tell you exactly why it isn’t:

BlueHost’s affiliate marketing scheme is very very lucrative, as you can see here from one of their biggest affiliates. 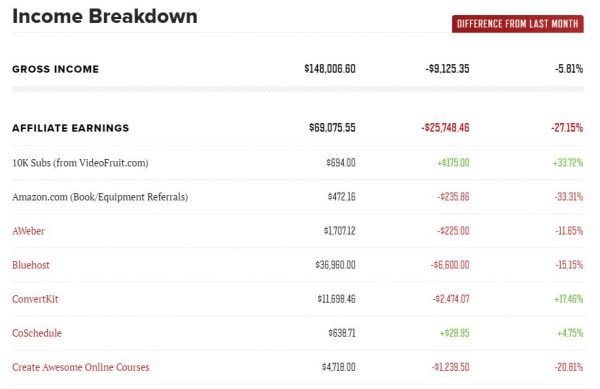 Pat Flynn makes a killing from his BlueHost affiliation, around half of his monthly affiliate income!

Affiliates who bring in customers get a very good payout, possibly the best in the industry. Every person who signs up from your affiliate link nets you a $65 cheque. Plus it is easy to sign up, the first website is so cheap and they hide their real costs behind the front page with low prices like $3.95 per month. 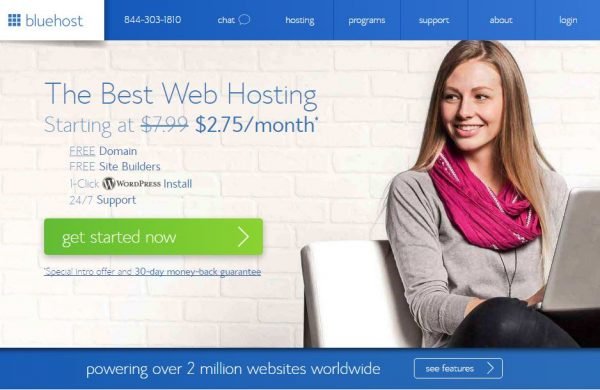 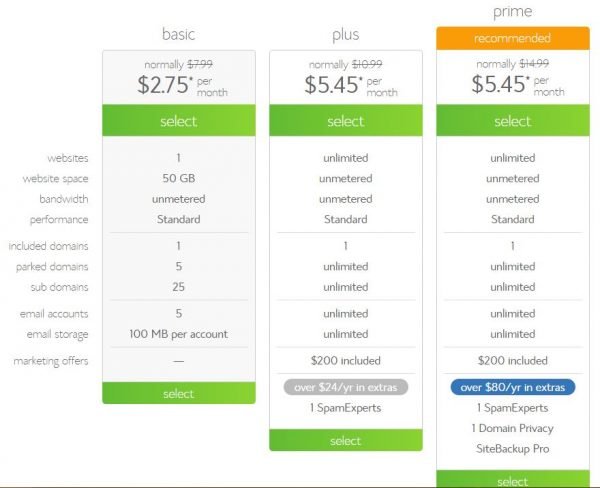 Also the $200 marketing offers only apply if you live in the US, something they don’t tell you until after you sign up.

That’s just for the first website, if you want another one that goes up to $5.45 (their real price $10.99 kicks in after a year). Even then all of your websites are unsecured, and since BlueHost doesn’t support free SSL/TLS services like LetsEncrypt (at the time of writing), they also require you to get a dedicated IP for every page you want to run it on ($13.95 per month with one SSL, but if you have more than one site it’ll cost you extra). As you can see if you are trying to run a small startup or new business, this gets much more expensive than the initially offered price, which of course they charge you in three-year amounts. This is classic bait and switch marketing. Why does BlueHost have such a huge presence in webhosting with such a poor product? Their affiliates do it all for them. They get the information out everywhere with their own websites, making the information ubiquitous until newbies (like myself admittedly) get conned into thinking that their cheap service will actually be serviceable.

The real issue is, in reality, that many entry-level or budget server companies are being bought out by the bigger ones. BlueHost was bought out by Endurance International, along with HostGator, iPage, Big Rock, SiteBuilder, domain.com… they have quite the portfolio. As soon as they acquire these companies, users report a massive drop in performance, support and service (read the comments) due to the nature of lowest common denominator style tactics. Because of their efficiency mindset, they are basically cutting the service to the bone, and you’ll save yourself a lot of hassle by going with a better provider.

By comparison, I have a good experience with my new host, SiteGround. Their support staff are a breath of fresh air compared to the BlueHost lazy reps. SiteGround staff don’t blame me for every problem that happens to my site, even when it isn’t my fault. They respond very quickly and clearly their staff listen to the customers; they have good systems in place and I’ve never been spoken to with anything other than respect. They also have quick servers, easy changeover from BlueHost (my site was up and running within hours on the new servers) and free Let’sEncrypt SSL security certificates. 100% would recommend them as I do to my web clients.

Like everything I write, this is my opinion (though I’m not the only one), and it is totally possible that you have had a great experience with BlueHost. Maybe you live in the US and always called them to get information, whereas I used the quick chat a few too many times; their tech support email didn’t reply to anything I sent them and I don’t live in the US so calling them (from Japan) uses up my skype credit pretty fast.

At the end of the day, it’s up to you whether you trust me or not. I’m just trying to save you a year of headaches like I had.

You can’t always trust affiliate marketers, so you gotta do your research. As Seth Godin says, “all marketers are liars”. Do your research before signing up to these kinds of services, and make sure that you’re getting legitimate reviews and not ones paid for directly or indirectly. Have you used BlueHost? What was your experience of them or your alternative webhost? Disclaimer: SiteGround links are affiliate links, but this review is in no way paid for by them. I just want people to know my awful experience with BlueHost. Any sales give me a small commission.

We frequently find ourselves listening to stories from our friends about things that happen in their lives. They might tell us about a coworker who joined the...